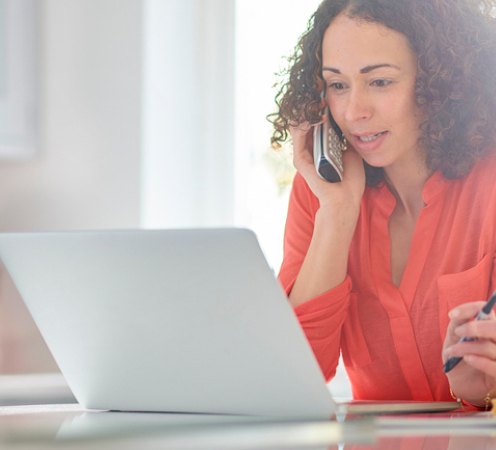 The Rise of Retail Traders

Meme stock mania may have cooled, but retail investors are still a growing force to be reckoned with.

We all know the pandemic has forever changed people’s lives and the economy. But has it also caused a permanent change in the behavior of individual investors?

It’s a question many market veterans have grappled with since January 2021, when young individuals, pockets lined with stimulus checks and bereft of entertainment amid pandemic mobility restrictions, poured into single stocks of beleaguered companies GameStop (GME), and AMC Entertainment (AMC).

Prices have since plunged from their peaks, and our analysis suggests that most retail investors who followed the Reddit contingent into GME and AMC have probably reaped muted returns at best.

Even so, as fall 2021 arrived it was evident that retail investors hadn’t lost their faith, either in their favorite meme stocks or stock investing generally. As of September 30, GME, AMC and another favorite meme stock, Koss Corporation (KOSS), were all still trading well above their prior-year levels, suggesting continued investor support. Meanwhile, retail investor market participation continues trending upwards. Retail investors’ share of total equities trading volume is now approaching 25%, up from 20% in 2020 and 10-15% the preceding decade. And they are not all chasing meme stocks. A new generation of younger retail investors are purchasing equities with the intention of becoming long-term market participants. 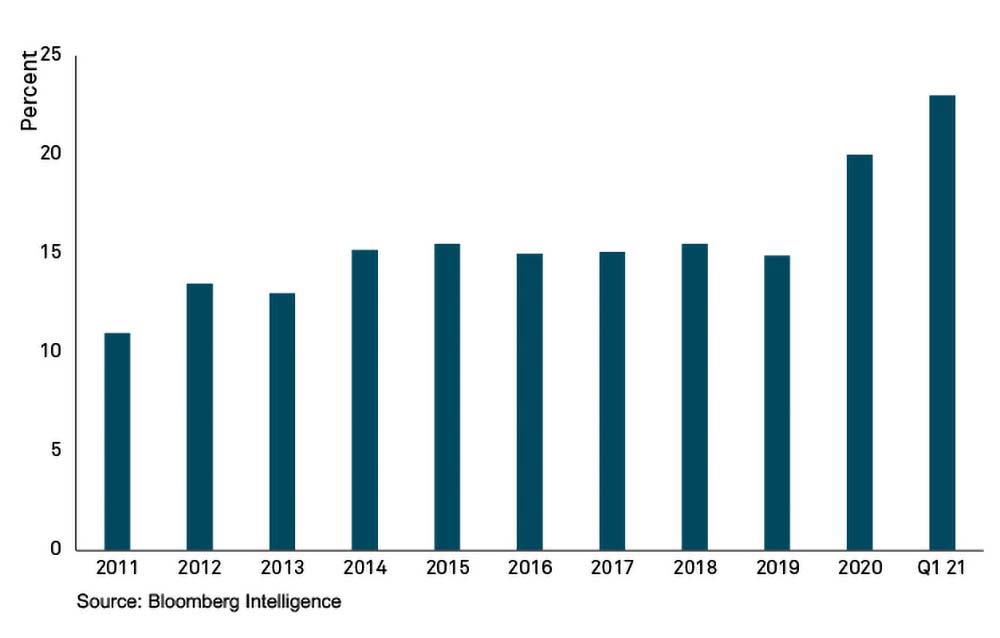 High-net-worth investors haven’t been affected by the rising retail trader presence, which has focused its interest on a few corporate names. But retail investors have proven to professional institutional traders that they can be a force to be reckoned with in single-stock trading. They can execute sophisticated tactical trading strategies that purposely up-end hedge fund positions, to push a company’s stock price far beyond its intrinsic value.

Not your dot.Com retail trader

The last time retail traders stormed the equity market en masse was during the dot.com bubble in the early 2000s. Back then, retail investors were a fragmented group of mostly novice traders, piling into technology stocks based on startups’ rose-colored visions of the future.

Many of the retail traders in today’s market have years of trading experience on FinTech mobile apps like Robinhood. In 2019, Robinhood increased market accessibility by cutting trading commissions to zero, which set off a cascade of copy-cat moves by Charles Schwab, TD Ameritrade, and Fidelity. Pandemic-induced lockdowns in 2020 then kicked things into high gear, as retail investors began fervent discussions about equities and trading strategies on social media forums like Reddit’s WallStreetBets (WSB).

The WSB forum had millions of followers in January, many of whom were driven by a desire to attack the hedge fund establishment. Reminiscent of Occupy Wall Street, many WSB members were embittered by the bailout of investment firms during the financial collapse. Seeing an extraordinary 140% of GME’s stock float shorted, Redditors devised a strategy to punish hedge funds and reap profits in the process.

They synchronized their buy orders and bought cheap, far out-of-the-money call options2 to leverage the capital they commanded, resulting in large upward moves for the previously floundering stock prices of GME and AMC. The sudden change of price direction forced hedge funds to buy more AMC and GME shares to cover short bets. The classic ‘short squeeze’3 impact, as well as continued buying by retail investors, sent meme stock prices on an upward spiral. On January 27 alone, stock prices of GME, AMC and KOSS surged 135%, 301%, and 480%, respectively. At their peak levels, they produced one-year returns of 3,500% (GME), 1,250% (AMC) and 2,850% (KOSS).

Retail traders may not have the ability to move entire markets, but trading volumes in meme stocks at their peaks demonstrated how great a force they can be when collectively targeting a single, lightly traded company. KOSS, for example, saw more than 6% of its total yearly trading volume occur on three separate days, while the S&P 500’s trading volume never went above 1% on any single day.

Stories of some retail investors becoming millionaires overnight made spectacular headlines – and created a false impression of how most buyers of meme stocks probably fared. Most investors poured into the stocks after Reddit investors pushed them to eye-popping levels. But the other side of the story is that GME, AMC and KOSS also plunged hard and fast from their highs. On September 30, the three stocks' prices were down 40-75% from their January peaks, and have suffered maximum losses of between 70-90% after reaching their respective highs. 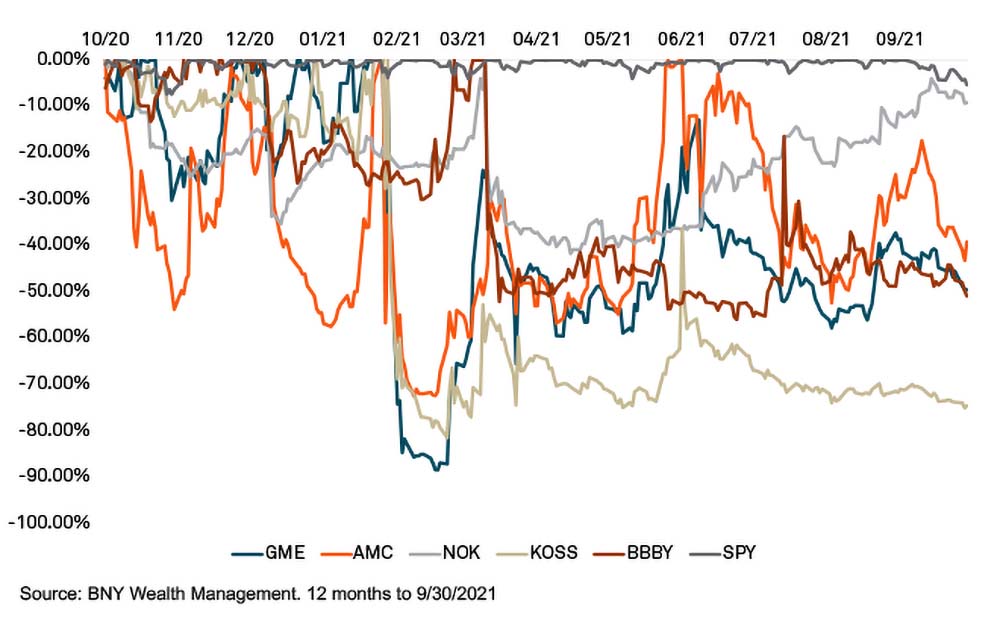 Exhibit 3: The Downside of Meme Stocks

To lock in such extraordinary returns, investors must have invested prior to January 2021 and sold them at or around their highs. While some retail investors might have done this, the majority poured into the market to chase meme stocks on their meteoric rise, leaving them at risk of suffering losses as the stock prices plunged.

One way to gauge the returns of the average meme investor is to look at the daily volume of shares traded for each meme company, on each day in the 12 months to September 30, as well as each stock’s daily open, high, and low price.

We then weight daily returns from the open, high, and low prices by the proportion of annual trading volume that occurred on any given day. Summing the values generates a range of returns4 that could have been experienced by average investors, depending on whether they bought on any given day at the high, low, or opening price.5 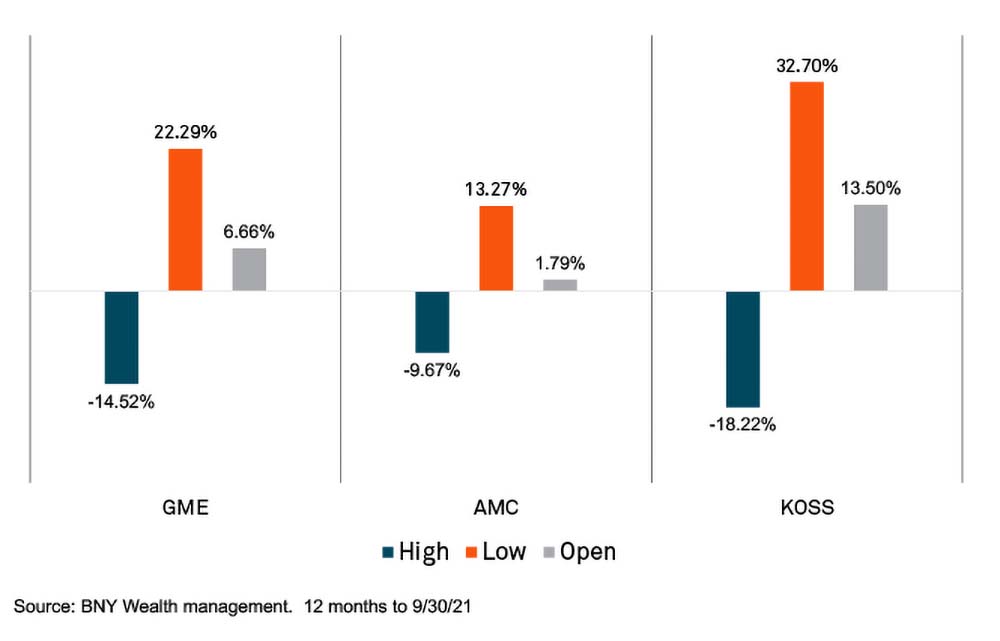 Purchasing meme stocks at daily lows could have generated a yearly return of between 14% and 33%.  Buying at the highs, however, would suggest returns of between negative 10% and negative 18%.  Buying stocks at the open, meanwhile, would result in returns ranging between 1% and 14%.

Although only an approximation, the analysis suggests that while some investors experienced massive gains and others may have incurred crippling losses, most individual investors trading meme stocks likely experienced more muted returns.

Clearly, investors in SPY (an ETF tracking the S&P 500) haven’t experienced such highs, but neither have they suffered huge losses. During the one-year period6 that meme stocks recorded highs measured in the thousands of percent, and price drops from peaks by as much as 90%, SPY had a maximum return of 35% and a maximum drawdown of only 7.5%.

Chasing returns typically leads to extreme volatility and the potential for excessive losses. It also undermines confidence and the ability to plan. Furthermore, over the longer-term, high volatility investment strategies, like buying meme stocks, typically don’t benefit as much from the power of compounding returns as more disciplined approaches.

That’s why BNY Mellon Wealth Management eschews performance chasing in favor of an investing approach based on institutional disciplines of determining an appropriate asset allocation, rebalancing opportunistically, and remaining invested. These core principles not only enable investors to plan life decisions with greater confidence, but they can also lead to greater wealth.

While it’s difficult to predict the future of meme investing, we see a permanent change to the retail investor landscape, with increasing numbers of Millennials and Gen Zers embracing the ease of investing through apps. At BNY Mellon Wealth Management we stand ready to educate new investors on why disciplined long-term investment strategies make the meme stock chase seem far less alluring.

3 A short squeeze begins when a stock price jumps higher unexpectedly, forcing investors shorting the stock to buy it instead, to cover their short bets.

5 To reach the estimated returns for an “average” investor in meme stocks we summed the weighted return from the high, low, and opening price on each trading day by that day’s proportion of total year trading. For example, if on February 1st GME opened at $100 and closed at $105, the daily return was 5%. If the high and the low for the day were $110 and $95, respectively, the daily return from the high and low price was -4.55% and 10.53%. Next, we determine the share of one year trading that occurred on a given day. If the full year saw 100 million shares exchange hands, with 5 million traded on February 1st, then 5% of shares were traded on this date. The contribution to full year performance on February 1st in this scenario is 0.25% for investors who bought at the open (5% x 5%), -0.23% (5% x -4.55%) for the investor who bought at the high, and 0.53% (5% x 10.53%) for the investor who bought at the low. Summing these figures for all trading days between 10/1/2020 – 9/30/2021 results in the range of returns we examine here. Our use of daily returns from the open, high, and low, and the proportion of shares exchanged on any given day, results in a range of returns that can approximate the mean return for all investors who traded these names throughout the year. In other words, the average investor.