The Rise (and Possible Fall) of SPACs

Special Purpose Acquisition Companies (SPACs) have been around for decades but have recently exploded in number and are dominating investment news headlines. In the first quarter of 2021, SPACs raised more capital than they did in the record-breaking year of 2020 and made up approximately 50% of the total U.S. IPO market.

Is this evidence of a smarter way to take private companies public or is this just a fashionable mania and the next potential investment bubble? Let’s explore how SPACs work, consider their advantages and disadvantages and examine whether the recent surge could lead to a bubble.

A SPAC is a shell company whose sole purpose is to raise funds through an initial public offering (IPO) to eventually acquire or merge with a private company, thereby taking that company public. For private companies, merging with a SPAC is a faster route to going public, as it involves fewer regulatory hurdles than the traditional IPO process.

It all starts with sponsors — typically well-known investors, venture capitalists and private equity groups — raising a pool of capital through an IPO. Sponsors for these “blank-check companies” typically have specialized knowledge in a particular industry and raise funds based on previous deals and their reputation. The capital raised is then put into escrow while the sponsors seek an acquisition or merger target.

Generally, sponsors have two years from the IPO date of the SPAC to identify an acquisition target and complete a merger, as demonstrated in Exhibit 1. This time frame is an important characteristic that defines the increased risk in the current SPAC environment. Historically, the sponsor may have already identified the target company and would attempt to complete the merger soon after the SPAC IPO. But recently a record number of SPACs have been created and attracted an unmatched amount of capital searching for potential targets.

The growth of SPACs

SPAC IPOs have seen resurgent interest since 2014, with increasing amounts of capital flowing to them. But in 2020, the pandemic-induced market volatility fueled even more interest in this fast and more-certain avenue for taking a company public. See Exhibit 2. 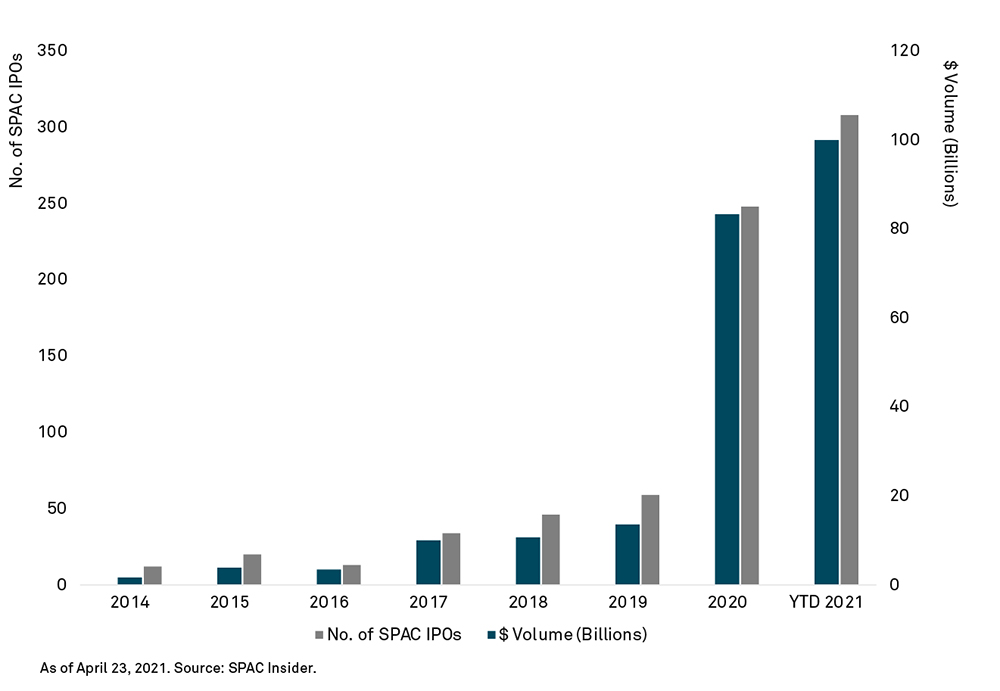 Weighing the advantages and disadvantages

SPACs offer a different pathway for a company to move from a private to a public entity, and with that comes some advantages and disadvantages.

On the plus side, for the company being acquired, SPACs provide a faster road to public trading with less regulatory scrutiny than a traditional IPO. Much like traditional private equity funds, an experienced sponsor can provide the guidance, executive leadership and industry knowledge that a small company might not otherwise have.

The mechanics and structure of a SPAC present several potential risks for investors, such as blind faith, a lack of transparency into the underlying target company and potential conflicts of interest. As an investor, you assume some degree of blind faith when you give your money to the sponsor as you are relying on the reputation of a portfolio manager and team of managers. Although sponsors traditionally have a particular sector or industry experience and a performance record as a guide for potential returns, some SPACs in today’s exuberant market are being created without that fundamental foundation. It is a trend that began with small teams and a few specialized situations, moved to investment celebrities, and expanded to a marquee of A-listers and pro athletes with little or no investment experience.

Compared to a traditional IPO, there is also a lack of transparency about the company you will eventually own. There is nothing yet to analyze —no product, revenue, cost or marketing data to evaluate. With a SPAC, companies are skipping an intermediate growth phase and immediately making the leap to a public entity, for which they may not be ready. The pressure of later public scrutiny may bring out the flaws in a business plan. The coworking company WeWork is a good recent example of investment scrutiny during the traditional IPO process. Their attempt at an IPO in December of 2019 would have valued the company at $47 billion, but the roadshow drew criticism of the company’s business model, future revenue stream and potential profits. The IPO was pulled and the company required private investment support to remain in business. It was recently announced that WeWork would be purchased by a SPAC and will become public through the reverse merger with a valuation of approximately $9 billion. While the traditional IPO process revealed some flaws in the company’s business model, it remains to be seen what the share price will be once the merger is finalized. Thus, as with many SPACs, the retail investor bears the risk that the share price could decline once the merger is finalized.

SPACs are structured to trade as units when formed and typically have a value of $10 per unit. It is not unusual for the post-IPO SPAC to trade at a slight premium to the underlying trust value. This premium value is assigned based on the sponsorship team and their reputation. Anticipation of a profitable future merger can drive up the unit price. With the current promotion and publicity of SPACs, we are seeing lofty trading prices that mask the risks of these investments.

Furthermore, sponsors and some early investors have acquired their interest at more favorable rates than that of SPAC IPO shareholders. The sponsor premium can be upward of 20% of the fund, which can create an inherent conflict of interest between the sponsor and the investor. As the end of the two-year merger period approaches, a sponsor faced with a deadline and the loss of a significant premium, may force a merger with a less than desirable company just to execute a deal. With the explosion in number of SPACs over the last six quarters and the large amount of funds raised, we are going to see a great number of buyers with a lot of money to spend amid approaching deadlines.

Recently, the Securities and Exchange Commission (SEC) raised concerns about the surge in this segment of the market. In its December 2020 bulletin, the SEC warned that “with an increasing number of SPACs seeking to acquire operating business, it is important to consider whether attractive initial business combinations will become scarcer.” It followed this with another alert in March 2021 about the uptick in celebrity involvement and endorsement of SPACs, cautioning that “it is never a good idea to invest in a SPAC just because someone famous sponsors or invests in it or says it is a good investment.”

The impact on private equity

SPACs made up 50% of the IPO market in 2020 compared to less than 5% historically, but their growth forces us to consider whether SPACs are good or bad for traditional private equity funds. Much like the saying that “there is no such thing as bad press,” SPACs are not inherently good or bad for the private equity industry. We could argue that some SPACs are taking public marginal, lower-quality companies that otherwise would not survive the regulatory scrutiny of a traditional IPO, or companies without a mature business model that wouldn’t receive a high enough valuation during the IPO process. These marginal companies may have been better served with a more traditional investment by a private equity fund until they were ready for their debut to the public. SPACs may also be negatively affecting the purchase prices for traditional private equity funds, by artificially driving up the target company’s price and squeezing the margins for other private equity managers.

On the other hand, all the headlines and attention on SPACs may shine more light on the success of private-to-public conversions and make it easier for private equity managers to attract new investors. These new investors may be drawn to private equity managers with longer track records and a broader portfolio than those offered by a SPAC. Ultimately, some of these reverse mergers will result in failed companies and losses for some of the SPAC investors. But like any industry, those losses just help distinguish the winners and losers. The best private equity managers and SPAC sponsors welcome the attention and the opportunity to make a case for why they will be successful.

Be aware of potential excesses

The surge in SPACs is reminiscent of several past bubbles where excesses formed in different parts of the market. Consider the dotcom bubble of the late 1990s. Companies with just an idea, a lot of debt and negative earnings were going public at high-flying valuations and multiples. The red flags became apparent for most sophisticated investors when inexperienced retail investors were jumping in with both feet. Everyday conversations with cab drivers, grocery store patrons and relatives turned into sharing the latest tips on the next big IPO. Missing from those tips were discussions of fundamental earnings, revenue or profit. A similar mania developed in real estate in 2007. Suddenly investors with little real estate experience were being enticed to purchase condos in Florida with little or no equity. As the froth in these markets continued, we began to see more middlemen creating pools of these investments targeting inexperienced investors with tales of exorbitant returns with no discussion of risk.

SPACs have proven themselves in certain circumstances and will always be an option for some private equity managers seeking to maximize return through a public offering. However, the warning signs of a potential bubble certainly exist. When it comes to investing, we continually remind clients that fundamentals matter more than hype. Investors who take the time to know what they own, diversify their investments and partner with an experienced manager will avoid potentially being left without a seat when the music stops.

1 Performance is a forecast based upon simulations and is not the result of actual trading, nor is it a promise of market values that a client portfolio may achieve. Percentiles are the results of stochastic (probabilistic) forecasts which take into account 2,000 sets of economic results. Exclusive reliance on the above is not advised.

3 For illustrative purposes only. Investments cannot be made directly into an index. Past performance is no guarantee of future results.

The information in this paper is current as of April 2021. It is based on sources believed to be reliable but its accuracy is not guaranteed. © 2021 The Bank of New York Mellon Corporation. All rights reserved.

Get the Most Out of Your Cash