Markets have rallied on hopes that lower inflation will prompt the Federal Reserve to change direction and cut rates in 2023. We think expectations of an imminent Fed pivot may be too optimistic.

Sometimes we hear what we want to hear, and when Federal Reserve Chair Jerome Powell told the press after the FOMC’s July meeting that “at some point” it will be appropriate to slow the pace of tightening, the market took it as a signal the Fed was not only going to slow its pace of rate hikes, but even start cutting rates in 2023.

Even though the Fed made its second consecutive rate hike of 75 basis points in July and left the door open for a third in September, expectations of an imminent dovish pivot by the central bank helped propel a 9.1% rally of the S&P 500, making July the strongest month for equities since November 2020. The 10-year Treasury yield fell by more than 35 basis points to 2.65%, the lowest level since April. Estimates for the federal funds rate at the end of 2022 fell 40 basis points from mid-June levels to 3.3% and year-end estimates for 2023 declined even further, by 100 basis points to 2.7%. These moves imply that the market expects the Fed to cut rates next year after its fastest hiking cycle since the 1980s. 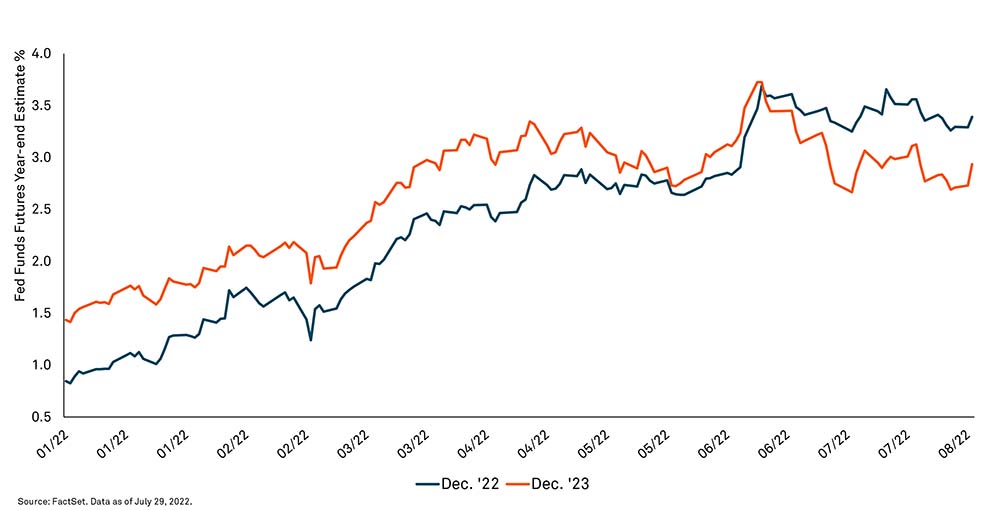 The drop in federal funds futures for both 2022 and 2023 reflects a growing sentiment among market participants that both inflation and the pace of Fed rate hikes have peaked. And to some extent, they’re right. We think inflation will likely trend lower in the near term. And obviously at some point the Fed will slow its pace of rate hikes.

Yet, what markets are not accounting for is the risk that inflation backs off but remains at stubbornly elevated levels. Cutting rates so soon after increasing them is also unlikely, given the Fed is cognizant of the deleterious effects of the “stop-and-go” monetary policy of the mid-seventies, which led to double-digit inflation.

That’s why we think the central bank is likely to maintain tighter policy until it has clear and multiple months of evidence that inflation is trending down towards its 2% target. While the pace of hikes may slow in the autumn, that’s a far different policy environment than one where the Fed cuts rates.

Hopes that inflation, measured by the Consumer Price Index (CPI), peaked in June at 9.1% have been fed by lower commodity prices and an easing of supply chain bottlenecks. Nevertheless, inflation is now broad-based and has moved from the rising prices of goods into the services sectors of the economy. These include areas such as wages and shelter costs like rents, which are sticky and take longer to adjust than commodity-driven headline inflation.

Fed officials have also taken every opportunity to stress how they are unlikely to flinch in the face of a weakening economy. Powell reiterated after the July FOMC meeting that the Fed’s top priority is bringing inflation back to its 2% target, even if it has to sacrifice economic strength and weaken the labor market.

Equity markets are looking more attractive for long-term investors, given washed-out sentiment, the deep selloff in consumer discretionary, communications and technology, and the re-setting of earnings expectations in some sectors. Even so, we expect further equity weakness and a range-bound market, as analysts’ earnings forecasts continue to decline to reflect continued pressure on profit margins as the economy weakens.

Although inflation-boosted revenues are largely meeting analysts’ forecasts during the second quarter earnings season, many companies are reporting lower profit margins as they grapple with the impact of a stronger dollar on overseas revenues, rising input costs, softer consumer demand, and wage pressures that haven’t been this high since the 1980s.

Earnings estimates for the S&P 500 in 2022 and 2023 are still vulnerable, despite having moved lower in the past month. At 17x current estimates, the S&P 500 earnings multiple is above its long-term average and doesn’t reflect the risk that earnings are likely to continue moving lower. With a Fed targeting a 2% Personal Consumption Expenditures (PCE) inflation rate, we think multiple expansion from here is unlikely.

What this means for investors

Equity markets are forward looking and anticipate changes in the real economy long before they show up in the economic data. For investors, we think the risk/reward calculation has improved compared to earlier in the year, particularly in certain profitable growth stocks, earnings-resilient industrials, and companies that have already taken a huge cut to their outlook.

We reiterate a point we frequently make and which, frankly, can be challenging to follow on the worst days and months: In such a complicated market environment, it is important to remain fully invested and to avoid trying to time the market. We never went underweight equities for that reason. Our equity allocation remains at neutral with a preference for U.S. equities over non-U.S. developed and emerging markets equities. And while we expect that inflation will move lower in coming months, we need further evidence that core inflation pressures have cooled before we’re convinced the Fed will end its hiking cycle at year-end, let alone pivot to rate cuts in the first half of 2023.

This is one of the most unnerving markets investors have encountered in a long time. Market volatility this year has been unprecedented, with 90% of trading days seeing at least 1% intra-day moves in the S&P 500. It’s rare to see the Fed increasing rates when the economy is clearly weakening. Typically rate hikes are intended to cool an overheating economy. Added to all this has been geopolitical uncertainty, and the hard reality that decades of easy money are over.

But investors should remember that tough markets do eventually right themselves. We are here to help you avoid emotionally driven mistakes, to stay diversified and invested, and to ensure you are pulling all levers of our Active Wealth management strategy to preserve and grow your wealth over the longer-term.

We wish everyone a wonderful rest of summer and please reach out to your wealth professional if we can help in any way.