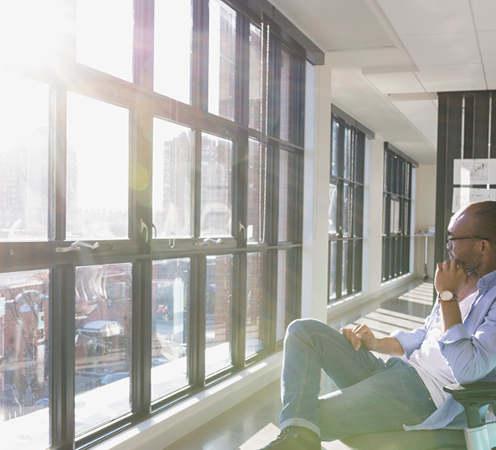 Gifting to U.S. Persons: A Guide for Foreign Nationals and U.S. Donees

A look at the tax and reporting requirements for U.S. recipients of gifts from foreign nationals, as well as possible ways to mitigate the tax bite when structuring and executing these gifts.

U.S. citizens and residents receiving gifts from friends and family abroad often ask whether they will have to pay U.S. tax on these gifts.

In most cases they and their non-U.S. donors are relieved but surprised to learn that such gifts do not incur U.S. income or gift taxes. However, depending on the size and structure of the gift, they may be responsible for reporting it, and risk severe penalties for non-compliance.

For the foreign donor, there may be various taxes as well as some reporting, both in the U.S. as well as in their home country. A companion paper, How the U.S. Gift Tax Applies to Foreign Nationals, discusses U.S. tax implications for foreign donors in greater detail.

When making gifts to recipients outside as well as within their home countries, it is also important for donors to be aware of possible taxes in the jurisdictions where they reside. The U.S. is not unique in taxing donors on their gifts. Many other countries tax their residents on gifts, with rates as high as 50%.1 And some countries without a gift tax per se have a deemed disposition tax or an income tax on gifts, which is essentially a tax on accrued capital gains in the assets being gifted.2 Others may have pull-back provisions in the event the donor passes away before a certain number of years,3 or the gift violates the country’s forced heirship rules.4

Reviewing the many and varied tax and legal provisions related to gifts made by residents around the globe is beyond the scope of this paper. Instead, we focus on the tax and reporting requirements for U.S. recipients of gifts from foreign nationals, as well as possible ways to mitigate the tax bite when structuring and executing these gifts.

IRS Form 3520, “Annual Report to Report Transactions With Foreign Trusts and Receipts of Foreign Gifts,” is one of the most common reports required when a U.S. person receives a gift from a foreigner. For gifting purposes, there are three key categories of U.S. persons who must file this form:

Generally the Form 3520 is due at the same time as the deadline for individual income tax returns, including extensions. However, it is processed in a different IRS location and must be filed under separate cover. Penalties for willful non-compliance are severe: the greater of $10,000 or 35% of the assets received.

In addition, depending on the assets they receive, U.S. donees may need to file one or more other forms. For instance, certain U.S. owners and decision-makers in foreign companies or partnerships must file form 54717 or Form 88658 respectively, and possibly Form 8858.9 In addition, if they have an interest in or signing authority over foreign financial accounts greater than $10,000 at any time during the calendar year, they are responsible for filing the Report of Foreign Bank and Financial Accounts (FBAR), and if they have interests in foreign financial assets greater than certain thresholds, they must file IRS Form 893810 with their income tax return.

Despite the fact that these are informational reports without associated taxes, the penalties for missed deadlines and non-filing can be harsh. If FBAR non-disclosure is deemed wilful, penalties are the greater of $100,000 or 50% of the account value of the undisclosed offshore assets, as well as possible criminal prosecution. As part of their current crackdown on tax evasion, the IRS and the U.S. Department of Justice are vigorously enforcing reporting requirements. Since the $53 million penalty assessed in 2004 on Ty Warner for tax evasion and delinquent FBARs,11 a number of high-powered cases have followed.12

Dealing with the Assets

Beyond filing all the required forms, U.S. donees may need to take swift action to mitigate tax problems with various types of assets they receive from foreign donors. Most foreign mutual funds are tax nightmares in the hands of U.S. taxpayers. Typically classified as Passive Foreign Investment Companies, these can cause significant tax headaches for U.S. owners and are not good choices for gifts to U.S. donees. They are probably best sold prior to gifting, or immediately upon receipt by a U.S. person.

Interests in Controlled Foreign Corporations (CFCs) can be even trickier. Exhibit 1 outlines the issue at stake. In light of this harsh tax treatment, special attention may be needed to deal with a foreign holding company or foreign partnership owning U.S. situs investments, particularly since the changes to the check-the-box election under the 2017 Tax Cuts and Jobs Act (TCJA). Prior to the TCJA, a simple foreign blocker structure was commonly used to block the application of the U.S. estate tax while allowing for the heirs to avoid paying taxes on embedded gains. However, the elimination of the 30-day window to effectuate a retroactive check-the-box election has made this planning significantly more complex.

This challenge is best dealt with by the foreign donor prior to any gifting or bequests involving CFCs. Foreign donors with U.S. donees are encouraged to seek experienced cross- border tax counsel when planning such structures to hold U.S. situs assets. 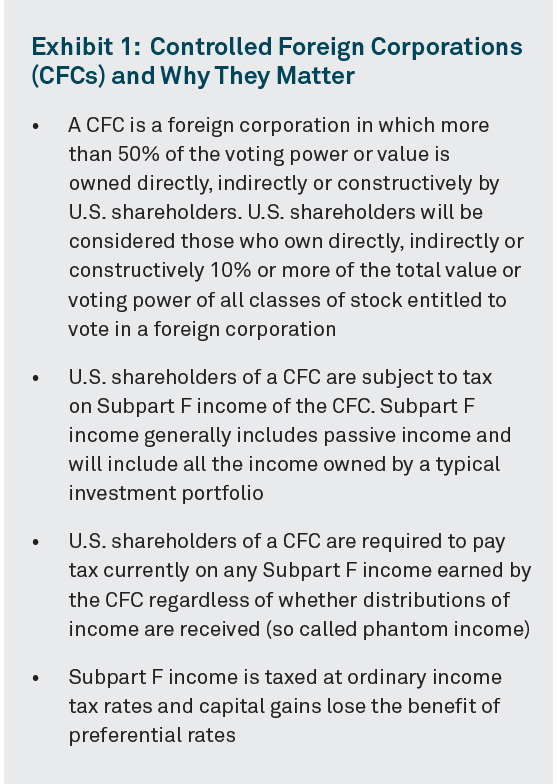 Other pre-gift solutions to mitigate taxes to U.S. donees 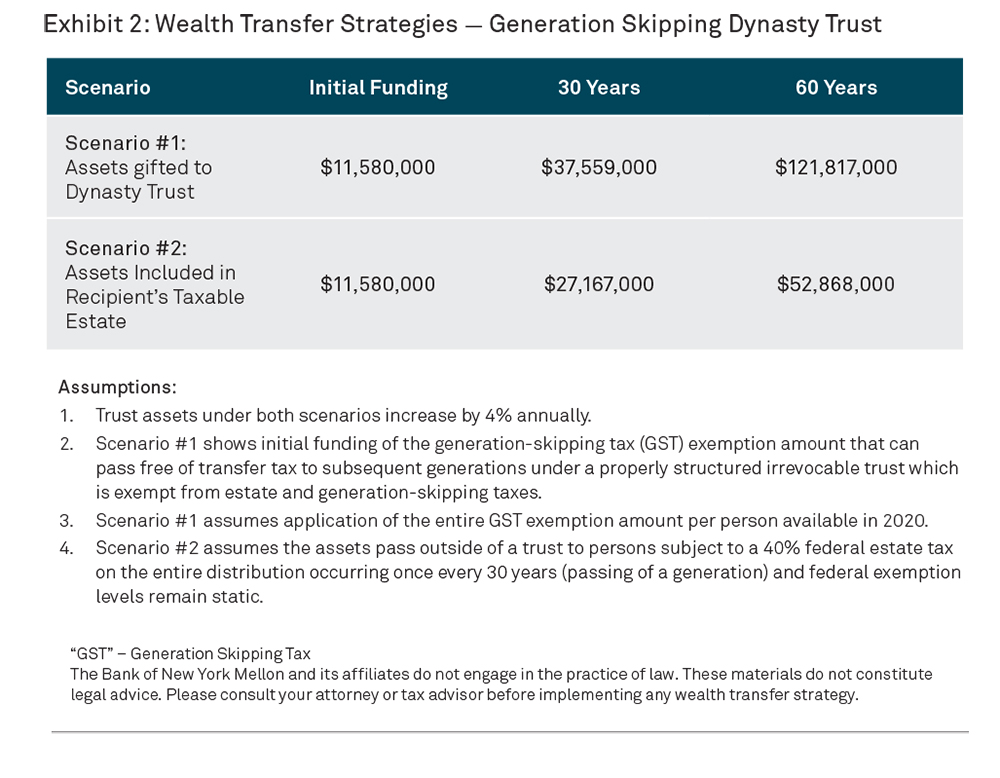 1. South Korea has one of the highest gift tax rates at 50%.

2. Canada is a prime example of the deemed disposition tax. Federal and provincial capital gains combined can be greater than 50% of the embedded gain. Mexico has an income tax as a result of a gift for gifts of Mexican situs assets to non-Mexican residents.

3. The United Kingdom has a seven-year pullback.

4. Forced heirship is common in many civil law countries, particularly in Europe and South America.

5. Qualified payments under IRC Section 2503(e) made directly to educational or medical service providers are not included as “gifts” for these purposes.

6. This includes executors of estates of U.S. persons who received distributions from foreign trusts. There is no minimum distribution amount required for reporting.

7. Form 5471, Information Return of U.S. Persons With Respect To Certain Foreign Corporations, is required for U.S. officers, directors or shareholders with at least 10% ownership.

8. Form 8865, Return of U.S. Persons With Respect to Certain Foreign Partnerships, is required for U.S. partners in foreign partnerships, or entities taxed as partnerships.

9. Form 8858, Return of U.S. Persons with Respect to Foreign Disregarded Entities and Foreign Branches, is required for U.S. persons who own a foreign disregarded entity or foreign branch of a U.S. company.

10. Form 8938 is required for U.S. persons residing in the U.S. owning interests in foreign financial assets totaling more than $75,000 at any time during the year, or more than $50,000 at year end. Thresholds are higher for U.S. citizens living abroad.