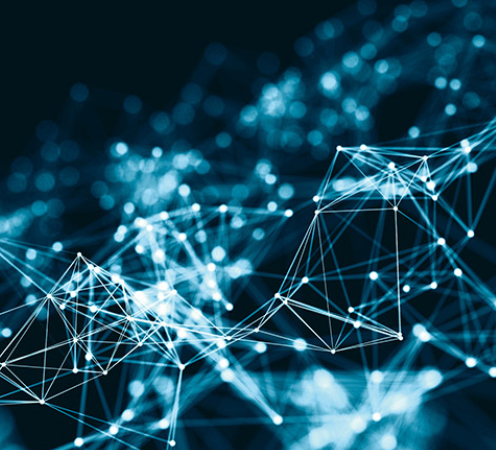 A look at how digital currencies work, what’s behind the underlying blockchain technology and investment considerations.

Interest in Bitcoin continues to grow as the cryptocurrency reaches new highs. The rise in its value over the past few months has been stunning, with its price doubling in value from $20,000 in December 2020 to $40,000 less than a month later. On February 16, 2021, Bitcoin’s price touched $50,000 for the first time.

While the buzz around cryptocurrencies was initially driven by individuals, more recently institutional investors and businesses have become more heavily involved. One example of the latter is Tesla, which recently announced the acceptance of Bitcoin as a form of payment as well as an investment.

In recognition of the increasing adoption, BNY Mellon announced plans on February 11, 2021, to provide an integrated service platform for digital assets later this year, initially to institutional clients. This is an important step in assimilating digital assets within the broader financial ecosystem, and reflects the growing acceptance of cryptocurrencies among asset managers, hedge funds and other institutional investors. BNY Mellon is the first global bank to announce a structure that will support cryptocurrencies and allow them to flow through its financial network.

Although many investors may fear missing out on the stellar advance of Bitcoin in particular, we believe there are several factors that should be considered before making an allocation to digital currencies as a direct investment within a portfolio. In particular, it’s important to understand how digital currencies work, what’s behind the underlying blockchain technology and investment considerations.

At their core, cryptocurrencies provide an electronic payment system that enables paperless transactions from one party to another through blockchain technology (Exhibit 1). The transactions are secured with cryptography and are entirely anonymous. As cryptocurrencies are digital and direct, they bypass middlemen such as banks or credit card companies, and there is no central monetary authority. 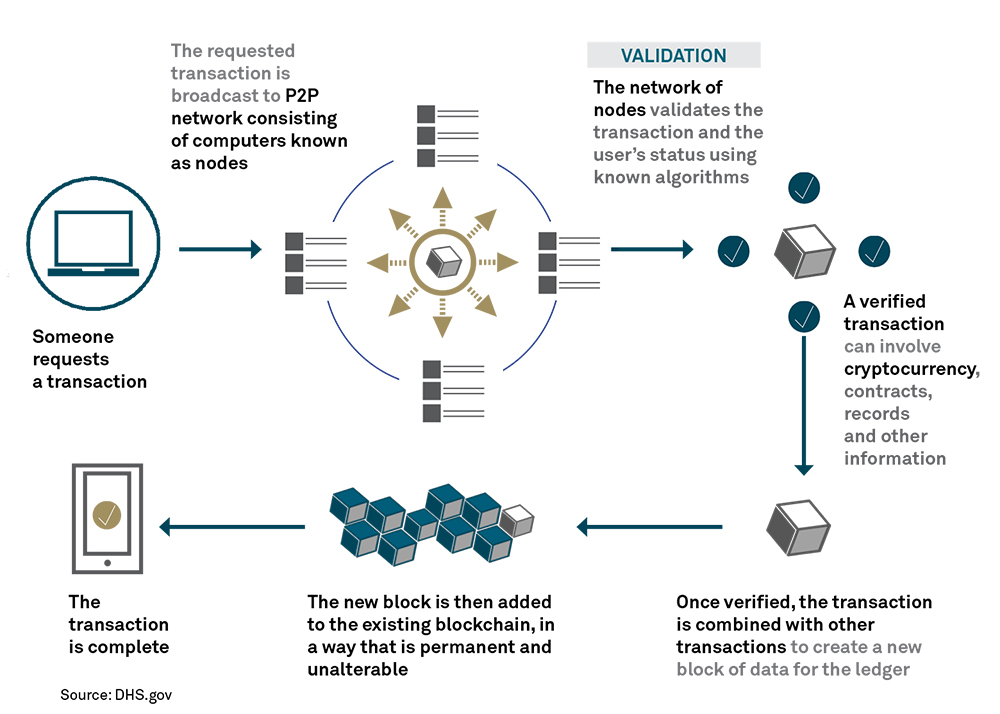 Bitcoin is the most well-known cryptocurrency but others, such as Ethereum, Ripple and Tether also have a strong following (Exhibit 2). Though their potential as alternative currencies is what first garnered the public’s attention, it’s the underlying blockchain technology that may have broader applicability as a potential replacement to many existing electronic transfer and settlement systems. 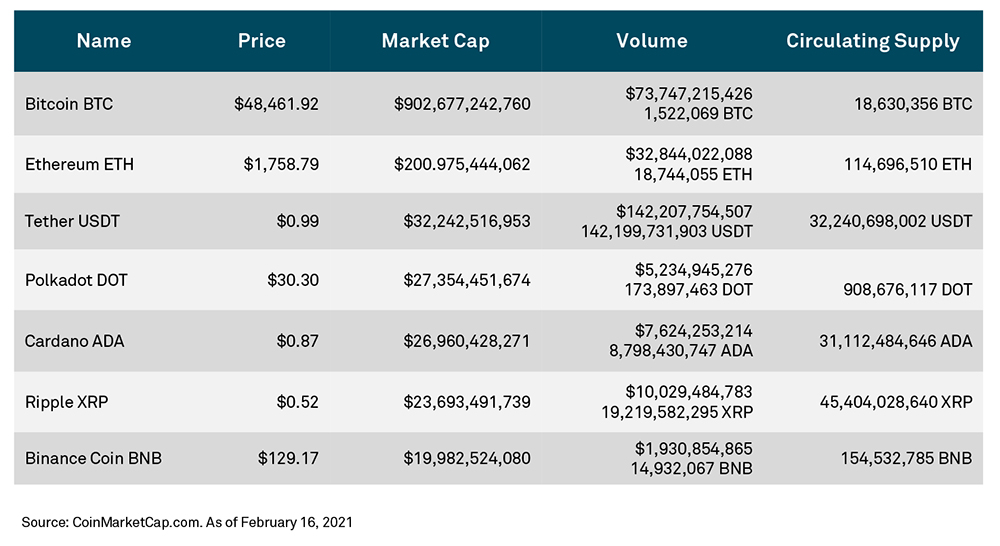 Blockchain is a digital ledger that logs transactions in real time without the need for a single, centralized authority. In the case of cryptocurrencies, transactions that take place on the network are compiled into “blocks,” which are added to the chain in chronological order. On their local computer, everyone who participates in the network has a copy of the blockchain, which contains a record of every transaction ever made, allowing for a transparent auditable trail. This distributed network of computers is used to validate transactions and to prevent tampering or duplicated entries. By offering a secure and efficient method of exchanging and validating information, blockchain technology could have a tremendous impact on the global economy, with significant implications for the financial services, health care, real estate and consumer sectors. Because of this broad application, blockchain technology has the potential to be more meaningful than the cryptocurrencies it powers.

Bitcoin’s 2009 creation is shrouded in mystery. The true identity of its creator, who goes by the pseudonym Satoshi Nakamoto, remains unknown to this day. Bitcoins are produced through a process called “mining,” in which participants in the network are awarded Bitcoins as a reward for solving complex computational problems that help verify transactions and add them to the blockchain. Each Bitcoin has both a private and a public key that enables secure trading, selling and spending.

As of February 16, 2021, Bitcoin’s market cap stands at more than $900 billion, double that of companies such as Walmart and Visa, and far exceeding the value of the world’s largest banks (Exhibit 3). Much of that value was gained recently: Between October and December 2020, Bitcoin’s market cap rose from roughly $196 billion to a high of over $750 billion.1 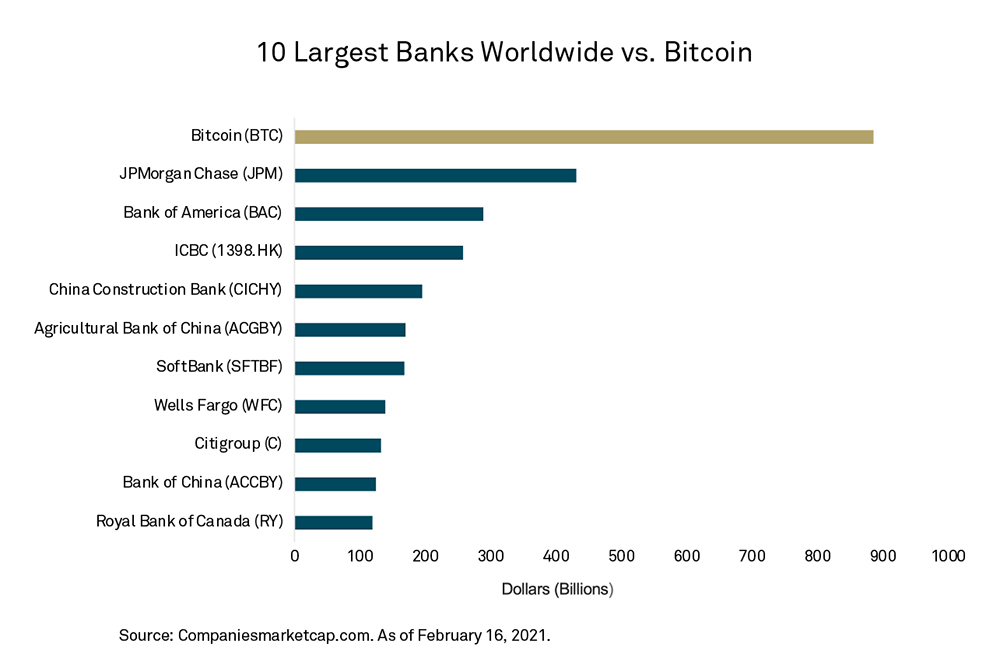 As a means of exchange, Bitcoin offers several advantages, including enhanced privacy, independence from country-specific monetary policies and substantial cost reductions for transactions. It also creates exposure to additional risk presented by Bitcoin’s heightened volatility and illiquidity, which may render it a poor store of value in the near term.

Use as a form of payment has grown in acceptance as large payment processors such as Visa, Mastercard and PayPal have embraced the growth of cryptocurrency. They have been working to extend processing capabilities to the millions of merchants within their networks. While it has yet to become a widely accepted medium of exchange, steps are certainly being taken for its adoption. The recent announcement that Tesla will not only accept Bitcoin as aform of payment but has also invested $1.5 billion in the cryptocurrency has gained significant attention. It is unclear, however, whether Tesla views its Bitcoin holding as a long-term investment.

Not your keys, not your coins

Bitcoin offers no means of financial recourse for its users. There’s no FDIC-style consumer protection for stored Bitcoins. Losing one’s private key means losing access to Bitcoin assets, and there’s no way to recover them. For example, tech writer Campbell Simpson purchased 1,400 Bitcoins for $25 in 2010 and kept them stored offline on a hard drive. He later disposed of the hard drive without backing up its data.2 Without the hard drive, those coins — and the value they represent —were lost forever. As of December 31, 2020, those Bitcoins would be worth over $40 million.

It is estimated that up to 20% of Bitcoins mined have been lost forever. While PayPal has recently begun to offer the ability to purchase Bitcoin through its network, it does not provide purchasers with their private key, which is raising concern among the cryptocurrency community.

A volatile asset: hold on for dear life (HODL)

Bitcoin is highly volatile, which is perhaps one of the large obstacles to broad adoption. Originally a typo for “hold,” HODL has become known as “Hold On for Dear Life,” the term used to refer to a Bitcoin holding period of greater than one year. Individuals who hold Bitcoin for more than one year are known as “hodlers.”

With large fluctuations in price, it is difficult to know precisely what the purchasing power of one’s holdings will be over any period of time. Bitcoin started 2017 below $1,000 and increased to nearly $20,000 by the end of the year. Twelve months later, Bitcoin had dropped back to $3,100. Fast forward to 2020, and Bitcoin was relatively stable for the first three quarters, trading around $10,000 except for the pandemic-driven pullback in March. During the fourth quarter, increased institutional ownership, further expectations of supportive monetary and fiscal policy and renewed interest by retail investors propelled Bitcoin to end the year at nearly $30,000.

Despite what seems like extreme volatility and a meteoric rise in what usually precedes a bubble, so far Bitcoin is unlike any bubble in history. It has survived three peak-to-trough drawdowns of over 80% in a span of 10 years (Exhibit 4). This is different than previous bubbles, which usually experience a drawn out “boom-doom” cycle spanning many years or an outright collapse akin to the death knell of tulip mania in the 17th century. 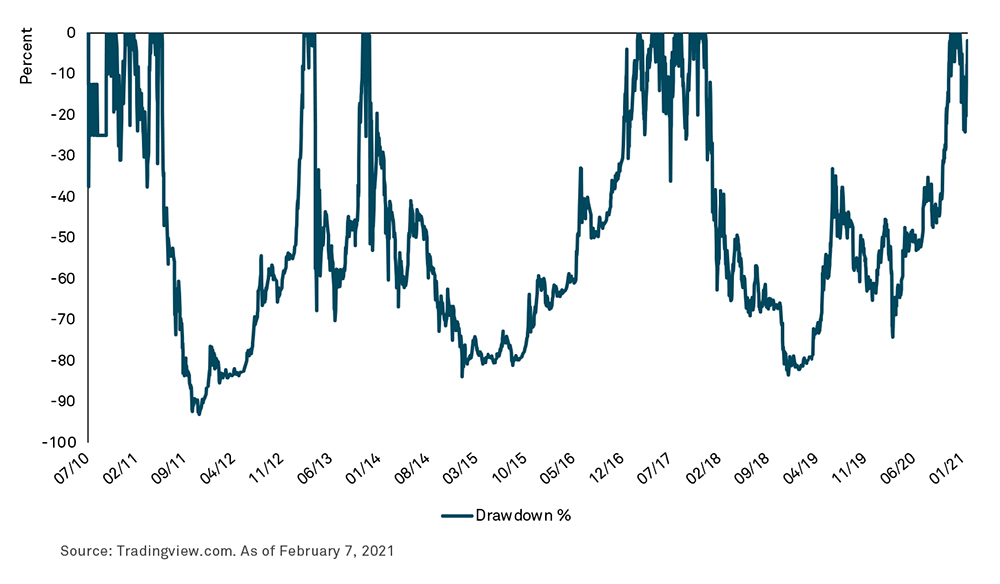 Though the level of attention Bitcoin receives in the media may make it seem ubiquitous, as a currency, it is incredibly scarce. By design, Bitcoin has a finite limit as only 21 million Bitcoins can ever be generated. The mining process becomes more difficult and less rewarding as time goes on. It’s projected that 94% of all Bitcoins will have been mined by 2024; the very last Bitcoin is expected to be mined sometime in the year 2140.3 In addition, a few large holders commonly referred to as “whales” continue to own most Bitcoin. It is estimated that 95% of all available Bitcoin is held by 2% of accounts.4

Digital currencies are lightly regulated at present. Very few countries have set firm guidelines to regulate cryptocurrencies or even to decide which governmental branch might be responsible based on asset type. The U.S. has deemed it a commodity under the Commodities Futures Trading Commission (CFTC). In an encouraging development in January 2021, the Office of the Comptroller of Currency (OCC) permitted banks to use stablecoins to facilitate payments, which potentially allows for much faster, real-time payments both nationally and internationally. Stablecoins are a type of cryptocurrency that are backed by more stable assets, such as fiat currencies like the U.S. dollar. In parallel, several central banks are researching whether to launch digital versions of their respective fiat currencies, such as a digital euro, or a digital dollar.

Direct investing in Bitcoin presents specific challenges at present for a number of reasons we’ve discussed, including security concerns, extreme volatility and minimal regulatory guidance. There are also only a small number of investment vehicles that currently exist, but their characteristics are closer to those of alternative investments rather than traditional currency exposure. Currently, no ETFs or mutual funds exist; however, on December 30, 2020, investment management firm VanEck submitted an application to the SEC for the VanEck Bitcoin Trust.

There are currently two subscription-based cryptocurrency investment solutions. They have limited liquidity and often experience dramatic valuation differences from NAV. Grayscale Bitcoin Trust has a six-month “lock-up” and is currently trading with a 15% premium to NAV. The other is Bitwise 10 Crypto Index Fund, which trades at a 63% premium to NAV as of January 26, 2021. Fees for both vehicles average about 2%.

Another way to invest in blockchain or companies with exposure to cryptocurrencies is through private and/or venture capital funds. Similar to those noted directly above, there are liquidity restrictions and the component focused on blockchain may only be a small portion of the overall fund. A private fund example is the SkyBridge Bitcoin Fund LP, which was launched in January, and may provide investors with another investment alternative.

While BNY Mellon Wealth Management clients can gain indirect exposure to cryptocurrencies and this emerging blockchain technology through private equity funds, at present that represents a small proportion of those investments. As a fiduciary, we do not currently allocate to Bitcoin as a direct investment in client portfolios. However, we have been encouraged by recent developments, and there are several important aspects we are watching closely as we evaluate its merits as a potential investment in the future:

At BNY Mellon, we are excited about the evolution of digital currencies, including their near- and long-term outcomes, and the potential impact on markets, asset classes and individual companies. The development of BNY Mellon’s Digital Assets unit to address clients’ growing need for cryptocurrency solutions is an important step in enabling broader adoption. BNY Mellon is also a founding member of Fnality International, a new potential global blockchain payment system for institutional financial payments, settlements and margin. We look to continue to meet the growing client demand for digital assets, solutions and advice as this space emerges.

For now, however, digital currencies have many characteristics that are unlike traditional assets. Investors interested in making an allocation should ensure they are fully aware of those aspects and commensurate risks prior to any direct investment. In the absence of any SEC-approved investable securities like ETFs, the best way to capitalize on Bitcoin’s potential may be through investments in publicly traded companies with a high exposure to crypto/blockchain technology or through private equity investments. At present we do not allocate to Bitcoin as a direct investment in client portfolios. As with all assets, prior to inclusion, virtual currencies such as Bitcoin would be subject to rigorous analysis to identify the underlying valuation drivers and liquidity characteristics, in addition to research and due diligence on any specific investment vehicles and/or managers. We continue to closely watch developments in the virtual currency space.