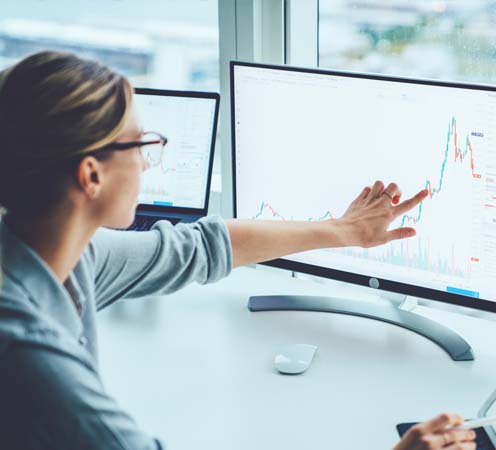 Investment Update
What is the Yield Curve Telling Us?

The Treasury yield curve has been like a roller coaster, inverting one month and steepening the next. Here’s what it’s telling us and why we're unlikely to suffer a recession this year.

The closely watched U.S. Treasury yield curve has been on a roller coaster ride in recent weeks, rattling markets at the beginning of April when, for the first time since 2019, the 2-year Treasury yield went higher than the 10-year yield. This inversion (that is, when shorter maturity Treasury yields are higher than longer dated Treasurys) was in reaction to the Federal Reserve’s vow to do whatever it takes to bring inflation down from 40-year highs.

The inversion was brief (the 10-year note was hovering near 2.8% as we went to press, about 20 basis points higher than the 2-year’s yield1) but its appearance has left its mark. Because a yield curve inversion has been a leading indicator of a recession, it has increased talk of a possible U.S. economic downturn in the quarters ahead.

We don’t expect a recession to occur this year, but the risk of one does increase in 2023. To understand why, it’s important to look at the history of yield curve inversions and whether recent concerns about an imminent recession have merit or are overdone.

During a tightening cycle it’s normal for yields on short-term Treasury notes to rise more than long-term rates, which flattens the yield curve. And markets anticipate that relationship as we saw in the first months of this year, when the 2-year yield rose faster than the 10-year in anticipation of rate liftoff by the Fed.

But since the Fed’s 25-basis point hike in March, its governors have been signaling the central bank is prepared to fight inflation even more aggressively than first thought. As the bond market repriced the Fed’s pivot to a faster tightening cycle, the 2-year note yield overtook the 10-year yield by 7 basis points on April 1.

Five of the last six recessions, defined as two consecutive quarters of negative GDP growth, have been preceded by an inversion in this part of the Treasury yield curve. The only time the economy did not enter a recession after an inversion between 2- and 10-year yields was in 1994.

After seeing the yield curve invert, along with March’s Consumer Price Index hitting an 8.5% year-over-year growth rate, it’s not surprising that investors are concerned that the Fed may not be able to tame inflation without causing a recession. Even so, could this recent inversion be different?

There are a few points to consider. First, the inversion was short-lived, with the 10-year yield trading some 20 basis points higher than the 2-year yield as we went to press, causing a re-steepening of the yield curve. The 2-year note, most sensitive to imminent Fed rate hikes, has been steadily rising on the back of persistent hawkish rhetoric from Fed officials. The move higher in the 10-year yield, meanwhile, reflects higher consumer and wholesale inflation numbers for March, as well as the Fed’s intention to start reducing the amount of bonds on its balance sheet as it also increases rates.

Second, another closely monitored part of the yield curve and one preferred by the Fed is the spread between the 3-month Treasury bill and 10-year note. Currently, this part of the curve remains steep at about 200 basis points and is not signaling a recession.

Third, the 2s/10s inversion could have been a false signal. Quantitative easing (the Fed’s purchase of Treasury bonds and mortgage-backed securities) has made inversions more likely by keeping longer maturity Treasury yields artificially low. Perhaps history is not a perfect comparison, given the amount of fixed income the Fed has bought and kept on its balance sheet over the past 15 years to keep markets liquid during crises.

It is also important to recognize that while recessions typically follow an inversion of the yield curve, it doesn’t mean that a recession is imminent. In fact, as the chart below illustrates, it has historically taken 16 months on average for a recession to begin, with the six months prior to the pandemic-induced recession an outlier. 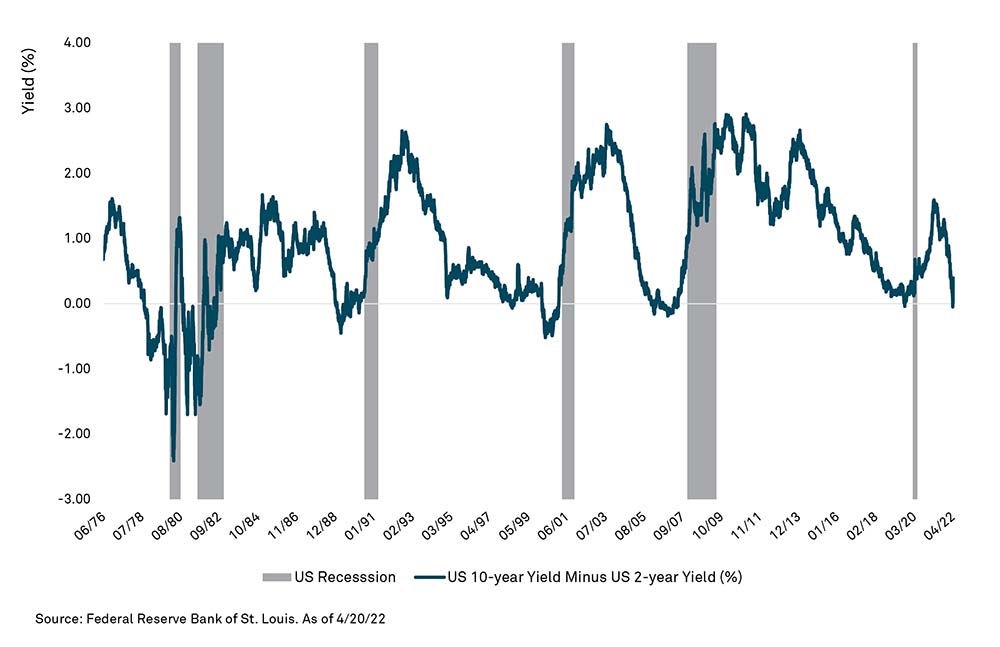 It is easy to get caught up in the latest headlines proclaiming a possible U.S. recession this year, but we disagree with those calling for this scenario, and don’t believe it to be the base case – at least for now.

We think the U.S. economy is strong enough to withstand a fast pace of tightening. On the positive side, the U.S. consumer is healthy, with excess savings built up from pandemic-related stimulus, and less debt on their balance sheets.

Consumer spending has proven resilient so far, with the most recent retail sales report up 0.5% in March. But while actual dollars spent grew, real retail sales (after inflation) have fallen. It will be important to monitor consumer spending, especially given that it accounts for 70% of GDP.

The labor market also remains tight, with unemployment at 3.6% and job openings historically high. Corporations are also still profitable, with consensus estimates for a 4.5% increase in S&P 500 earnings in the first quarter versus a year ago.

However, the risks to this mid-cycle economic expansion have grown, with Russia’s invasion of Ukraine putting increased pressure on commodity prices, and as concerns about continued supply chain disruption arise from China’s recent covid-related shutdowns. These factors, in combination with the Fed’s more aggressive path of tightening, have led us to moderately lower our U.S. GDP forecast for 2022 from 4% to 3%-3.5%, a pace that’s above trend, but slowing.

Combatting inflation while avoiding high unemployment and recession will be the goal of the Fed. But that balancing act has now become more challenging. This tightening cycle is different than others in the past because the central bank is clearly getting a late start. With inflation proving to be longer-lasting and elevated at 40-year highs, it is evident that the Fed missed its opportunity to get ahead of inflation last year.

We anticipate a front-end loaded tightening cycle with a 50-basis point interest rate hike in May, June and July. Following that, we believe that we may start to see some clear easing of inflationary pressures, which could allow the Fed to pause ahead of mid-term elections. We believe the federal funds rate will likely reach 2.50%-2.75% by year end, a bit below what the market is currently pricing in.

We expect that more aggressive tightening upfront will begin to soften demand and growth. But, not enough to push the economy into recession this year. However, we recognize that this is a hard needle to thread and a great deal of uncertainty remains, given the war in Ukraine, shutdowns in China and the impact of both on inflation. For that reason, there is a risk the Fed could overshoot and tighten too much, which is why we have raised our odds of recession to 30% in 2023.

An inverted yield curve and an aggressive tightening cycle can have implications for the economy. But neither means a recession must follow. We can compare today’s market with 1994. This was a year in which the Fed raised interest rates aggressively, leading to very poor bond market returns, while the S&P 500 was able to post modest gains. The Fed was able to navigate a “soft landing” during the 1994 hiking cycle and it did set the stage for a very strong economy and stock market over the next five years.

Although the 2s/10s yield curve inversion has signaled a potential recession, there are reasons why this inversion could be different. And it is important to remember that historically stocks have done quite well as they wait for a recession to arrive – a wait that could be as long as two years. At this point, our view remains that the U.S. economy will grow at a solid but slowing pace in 2022, and that our client portfolios are appropriately positioned for what is so far proving to be a unique Fed tightening cycle.

The information in this paper is current as of April 2022. It is based on sources believed to be reliable but its accuracy is not guaranteed.